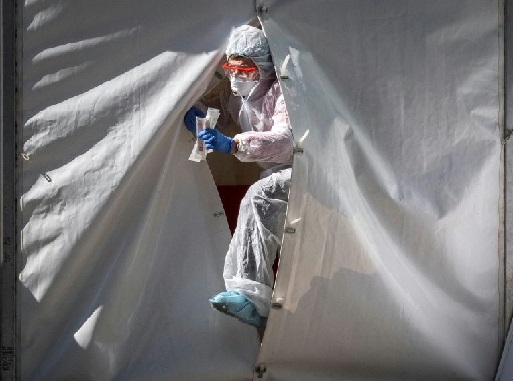 Another record rise in coronavirus infections has propelled Russia past Germany and France to the fifth highest tally in the world, as the French government confirmed the country would start gradually lifting its strict eight-week lockdown from Monday.

With much of Europe now easing itself out of confinement, Russia has become the continent’s new Covid-19 hotspot. More than half of the country’s 177,160 cases are in Moscow and the capital’s mayor, Sergei Sobyanin, said research suggested the actual number was nearer 300,000, more than triple the official figure.

Sobyanin, a leading ally of the Russian president, Vladimir Putin, said the tally was rising so steeply because of increased testing. “The fact that we have identified so many sick people is a huge plus, not a minus,” he said, because it meant those infected could be quarantined and the spread of the virus slowed.

Critics say Russia’s official death toll of 1,625 is relatively low because not all deaths of people who have contracted the virus are being counted as Covid-19 deaths. Authorities in the country insist Russia’s outbreak began later than in many other countries, allowing it to prepare better.

France’s prime minister, Edouard Philippe, said the country would begin emerging from lockdown from 11 May as planned. Shops will reopen but cafes and restaurants will stay shut, and people will be able to leave home without a form stating the reason.

Some restrictions, however, will remain in place in four regions including the greater Paris area, where the virus is still circulating. Philippe said the country was “cut in two, with the virus circulating more quickly in some regions, notably in the Ile de France region” around the capital.

Maximum vigilance will be required there, the health minister, Olivier Véran, said. Working from home will be encouraged, physical distancing must be observed, public transport use will be limited and parks and secondary schools will remain closed.

“Monday … won’t be a completely normal life, but it will be beginning of a new phase. It will need discipline and responsibility from every French citizen,” Philippe said.

In Germany, Lars Schaade, the vice-president of the Robert Koch Institute, said the nation would have to learn to live with the coronavirus, building tactics such as physical distancing and strict hygiene into normal daily life. The public health agency was halting its twice-weekly briefings, he added.

The Israeli government continued to relax its lockdown restrictions, going further than many countries by opening shopping centres, markets and gyms on Thursday. It also announced that preschools would restart on Sunday.

As the devastating economic consequences of the crisis continued to make themselves felt, another 3 million Americans filed for unemployment benefits last week, meaning a total of 33 million have made claims in the past seven weeks.