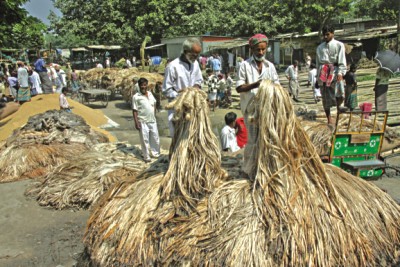 News Desk: Prime Minister Sheikh Hasina today spoke of reclaiming the privatised jute mills and factories in order to rejuvenate the glory of Bangladesh’s golden fibre.
“We will resume production in those mills and factories privatised in the past,” she said while visiting the Ministry of Textiles and Jute at the Secretariat.
“We need to expand our market, create new ones and boost production,” she added.
“Some state-run jute factories were handed over to the private sector in the past. The private owners failed to run those units within the designated time.”
During the previous Awami League rule from 2009-2013, then jute minister Abdul Latif Siddique ordered the sale of 47 state-managed jute mills.
In February 2014, the Prime Minister’s Office formed a panel which found that those units were sold in dubious fashion at throwaway price or for free.
“We will make such decisions no more. Rather, we will recover those sold factories from the private sector,” the premier said today.

“We have to bring back the glory of our past in the jute industry by resuming production of the mills and factories which have been privatised earlier.”

The premier also asked the authority concerned to take immediate measures to make the effort a success.