This man is about to make millions off the World Cup 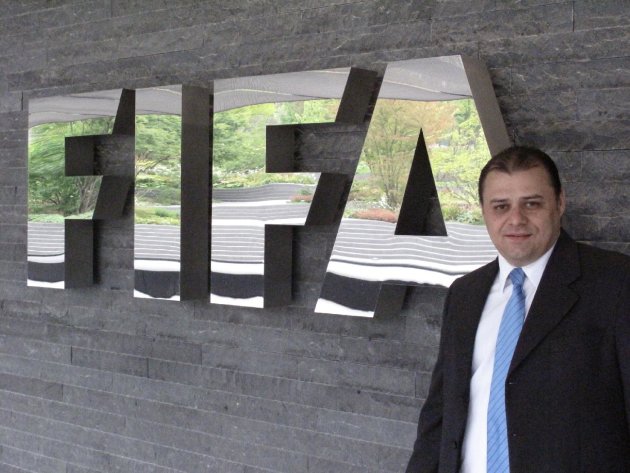 International News Desk: The man who came up with the vanishing spray used at the World Cup is set to make millions from his quirky invention.

Brazilian inventor Heine Allemagne came up with the clever idea after playing around with shaving foam after watching a World Cup qualifier in which the defenders constantly shuffled forward in the wall at free kicks.

“I was watching Brazil v Argentina in 2000, and the commentator caught my attention when he said he wanted to see the day that the wall could be kept at the correct distance,” he told Brazilian website Zero Hora.

“I thought: ‘There must be a way.’ A cheap product, biodegradable, and marks that would go away after some time, to make a continuous line, which was white. Then I went into the bathroom, grabbed the tube of shaving foam and marked the line on my arm. I saw that it worked.”

It wasn’t quite as simple as that, however: shaving foam proved too durable, so Allamagne tinkered with various formulas – until he created a spray that disappears after 60 seconds.

“We had to find something which would not affect the players’ health, nor be damaging to the surface. So we based the foam on vegetable oil. But it had to disappear quickly, too,” he told the Daily Mirror.

“After experimenting a little, we managed to find the right combination of ­ingredients, making the foam stay visible for around a minute.”

Even then, getting the product into use wasn’t plain sailing: it took nearly a decade and a half, but it was a proud moment when he saw his spray used at Brazil 2014.

“I dedicated 14 years of my life to this idea,” he added.

“After the referee brought it out the first time I started receiving text messages from my family and friends.

“It was the first time I got emotional, my eyes welled up. I remember thinking, ‘I’m not crazy. It was all worth it’.

It looks like that sacrifice will prove to be worthwhile: the spray had already been well established in South America before the World Cup, but after its huge success in Brazil it is set to be adopted by leagues across the world.

And at £3 a tin, Allemagne will become a millionaire many times over.

Allemagne rather cannily refused payment from FIFA for supplying just under £1,000-worth of the spray for the World Cup. That turned out to be the greatest bit of marketing imaginable – and from what the man himself says, the success hasn’t come a moment too soon.

“I hope that whatever financial gain is comparable to my 14 years of struggle. I’ve paid a high price. I chose not to see my children grow up so that I could make this work.”