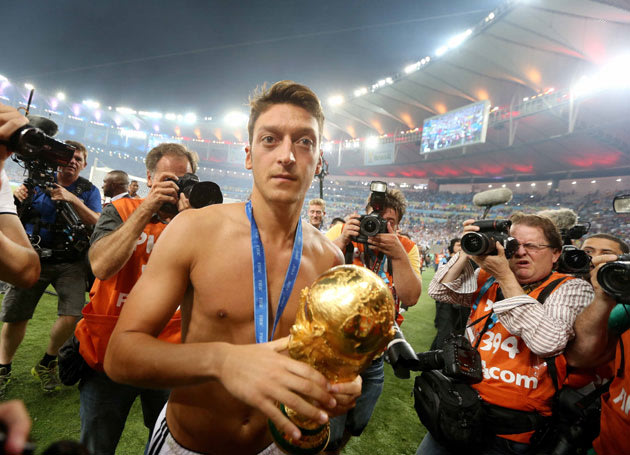 News Desk: Mesut Ozil reportedly gave away his £237,000 World Cup winnings, but there are conflicting reports as to just who the beneficiary is.

The International Business Times mistakenly reported that Ozil, who helped Joachim Loew’s Germany to a 1-0 win over Argentina in the World Cup final, had donated his winnings to the children of Gaza – according to a story in the Middle East Monitor.

Amid unrest in the Middle East, it was claimed that Ozil – who is of Turkish decent and a practising Muslim – was prepared to donate his semi-final and final winnings, which equate to a grand sum of £237,000, to the occupied territory.

However, this was quickly proved to be false, and conflicting reports now suggest that charities in Brazil are the beneficiary of the Arsenal midfielder’s earnings.

Rob Harris of The Associated Press explained how Ozil’s spokesman said the star had donated the money to projects in Brazil and not Gaza.

Wherever Ozil’s winnings have ended up, you can only commend the man for his selflessness and desire to help those considerably less fortunate than himself. Particularly given that he is showing his kindness with other pledges too.

Prior to the World Cup, he promised to sponsor the surgeries of 11 Brazilian children in need as part of the BigShoe charity campaign.

But now that Germany has won the World Cup, Ozil has announced that he will sponsor the surgeries of 23 children — one for every member of the German squad — to show his thanks for the host nation’s hospitality throughout the tournament.

So it seems Ozil will be reinvesting at least some of his prize money into the country that hosted one of the greatest moments of his life. Wonderful stuff.