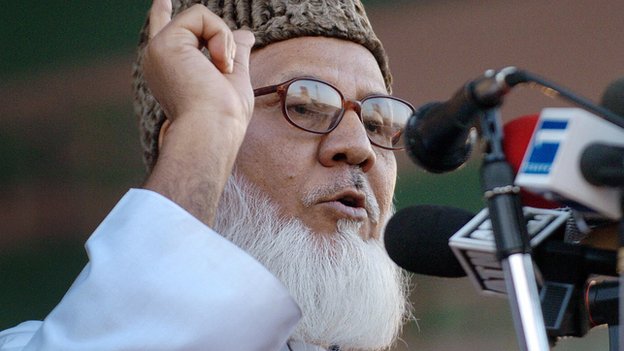 News Desk: The head of Bangladesh’s largest Islamist party has been sentenced to death for war crimes committed during the independence war against Pakistan in 1971.

A state prosecutor said the sentence reflected the “gravity of the crimes”.

There are different estimates for the number of people killed in the nine-month Bangladeshi war of secession.

Government figures suggest as many as three million people died, while some say that figure is too high and unverifiable.

A war crimes tribunal in Bangladesh with a three-judge panel announced the verdict to a packed courtroom in Dhaka.

Nizami, who was head of the Jamaat-e-Islami party, was accused of acting as supreme commander of a militia, al-Badr, an auxiliary force which helped the Pakistani army identify and kill pro-independence activists in Bangladesh.

The prosecution said the group carried out systematic torture and executions during the war, including of teachers, engineers and journalists.

“Considering the gravity of the crimes, the tribunal punished him with the death sentence,” state prosecutor Mohammad Ali told Reuters news agency. Defence lawyers said they would appeal against the verdict.

Nizami served as a minister in the Bangladesh Nationalist Party-led government from 2001-2006. The Jamaat-e-Islaami party called for a three-day nationwide strike to protest the decision.

Higher security measures were in place across Dhaka ahead of the verdict as previous decisions by the tribunal have sparked street clashes.

Prime Minister Sheikh Hasina set up the war crimes tribunal in 2010 to look into abuses during the independence war.

Correspondents say Nizami is one of the most important figures to be found guilty by this controversial court.

Critics have said the government is using the tribunal to target political opponents. Human Rights Watch has previously said the court’s procedures are not up to international standards.

The Awami League, which leads the current government, says it’s necessary to help the country come to terms with its past.