It’s a bit of a squeeze!

As the shortage of homes in London continues to bite, places to live are being jammed into nooks and crannies across the capital.A property now thought to be the narrowest home in London has gone on the market for more than £200,000.Built on a driveway between two other homes, and measuring just 83 inches wide, the house squeezes in two bedrooms, a reception room, kitchen and bathroom.Located in Harringay, north London, the two-metre-wide terrace house is to be sold at auction on 1 October.

“It’s a very unique house, to say the least, in a great location,” said James McHugh, spokesman for the company.

He added: “The property would certainly appeal to an owner-occupier or rental investor.”

However, the home is not the first property that has laid claim as the one of the country’s narrowest homes.

Earlier this year, a one-bedroom home in Denmark Hill, London hit the market with a whopping price-tag of £465,000.

The home (pictured below) has been built on a former garden and measures just 99 inches wide.

And in May, planning inspectors ruled that a 70 inch (1.8 metre) wide house in Leyton, east London should be returned to its original use as a garage.

The plywood fronted building (pictured below) was hastily erected without planning permission.

Sandwiched between brick terrace houses, the flat-roofed building, was branded “singularly out of place” and “wholly unsatisfactory” by planning inspector Ian Currie.

He dismissed an appeal by Akhlaq Mohammed against an enforcement notice issued by Waltham Forest Council, which required the property to be restored to its original use as a domestic garage/workshop within three months.

However, a home in Scotland still holds the crown as narrowest home in Britain. 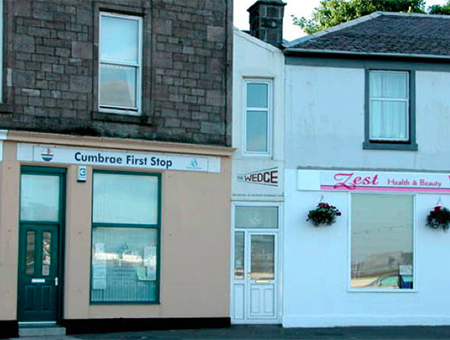 Located on the  island of Great Cumbrae, the one-bedroom apartment (pictured above) is just under 4 feet (1.19 metres) wide at its thinnest point.